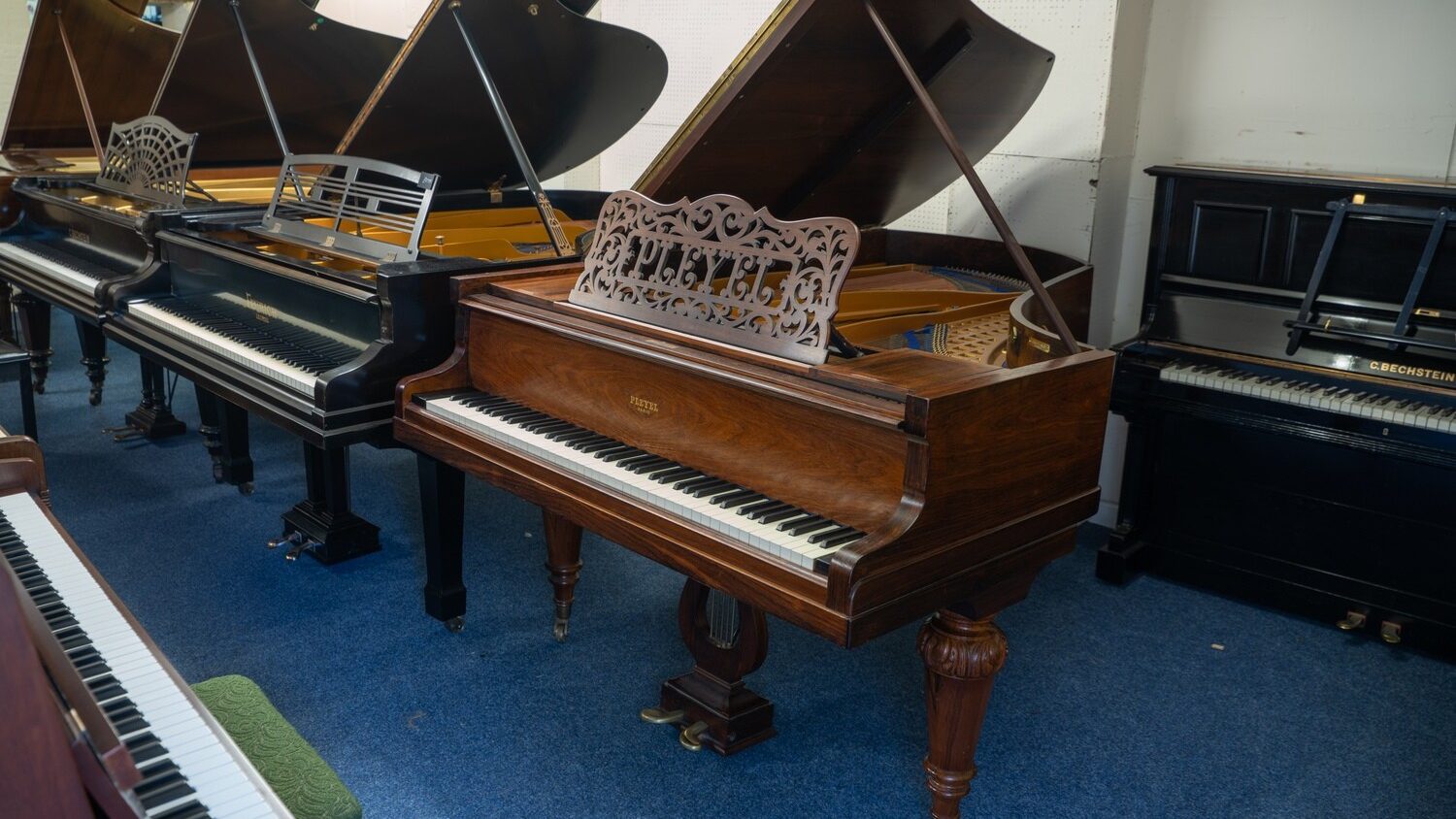 This Piano is now sold

This beautiful French 6’4″ Pleyel grand, was built in Paris in 1895. All of it’s original cabinet parts have been preserved, and it has been clearly cared for over the years.

In 2005, the piano was carefully and completely restored in a workshop in Cambridge, UK.

The piano previously belonged to a Pleyel enthusiast.

Pleyel pioneered the player piano with the Pleyela line of pianos. These were often very small pianos of a very unusual design.Around 1815, Pleyel was the first to introduce the short, vertically strung cottage upright piano, or “pianino” to France, adapting the design made popular in Britain by Robert Wornum. Their pianos were such a success that in 1834 the company employed 250 workers and produced 1000 pianos annually.

The company’s success led them to invest in experiments, resulting in the Double Piano in 1890, invented by Hungarian composer Emanuel Moor. Although not the first company to experiment with building two pianos into the same frame, Pleyel’s instrument, patented as the “Duo-Clave”, was by far the most successful and produced the largest instruments. The company manufactured a very small number of Double Pianos in the 1890s and continued to make them until the 1920s. CDs can be bought today of performances on some of these pianos.
In 1913, Pleyel built the “Jungle Piano” for use by Albert Schweitzer in his hospital in Lambaréné (French Equatorial Africa – now Gabon). It was fitted with pedal attachments (to operate like an organ pedal-keyboard) and built with tropical woods that would acclimate to conditions there.Toward the end of the 19th century, the Pleyel firm produced the first chromatic harp. In the early 20th century, at the behest of Wanda Landowska, it helped to revive the harpsichord.
Today
Pleyel continued to manufacture pianos through 2013, under the corporate auspices of the Manufacture Française de Pianos company. In the 1980s, the Pleyel company bought out the Erard and Gaveau piano companies which also manufactured pianos in France. The Pleyel pianos of today incorporated improvements of these companies and others. In the last two decades, Pleyel Piano was bought by the same family which had bought the Salle Pleyel concert hall in order to revive the name and quality of Pleyel pianos. They built a new factory in the south of France and started making a line of newly designed and improved pianos. Then, in 2008, they decided to downsize the factory and lines of pianos. They moved the factory back to Paris and opened a new factory where they began introducing new pianos designed by famous designers. The red spruce used by Pleyel comes from the Fiemme Valley in Trentino, Italy. After full assembly of a piano, the instrument receives a further 30–40 hours of fine-tuning.The company announced it would cease manufacturing pianos in France at the end of 2013.
In 2006, Hong Kong singer Edmond Leung performed in his concert on one of the world’s only two Pleyel pianos made for Chopin, along with 6 other pianos, ranging from 1844 (the Pleyel) to more contemporary pianos. Another one of which was a newer version of a Pleyel piano.