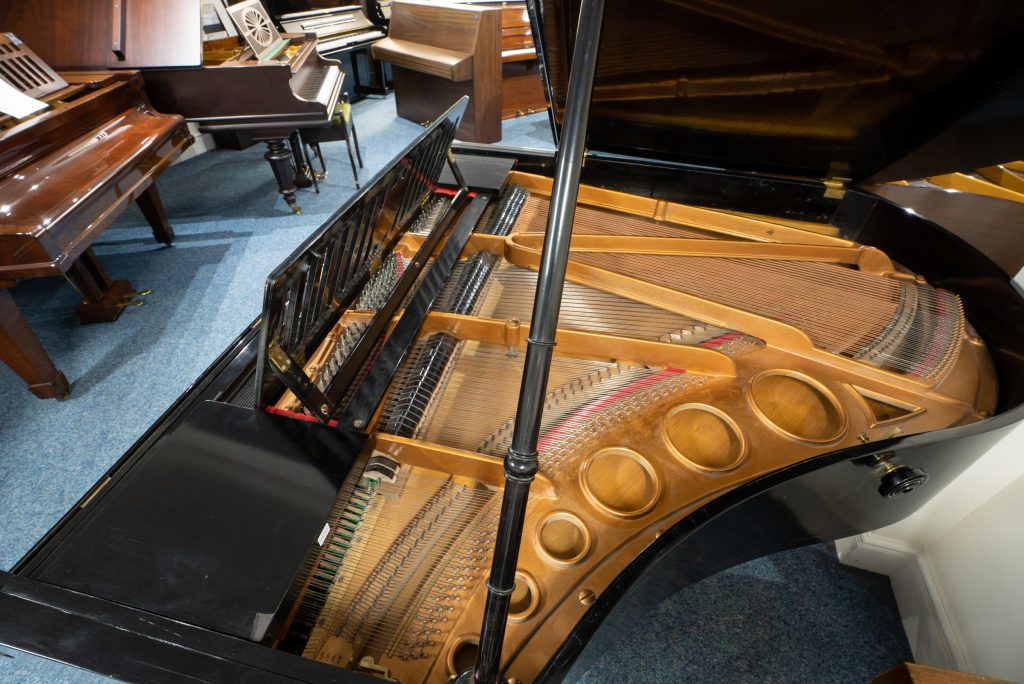 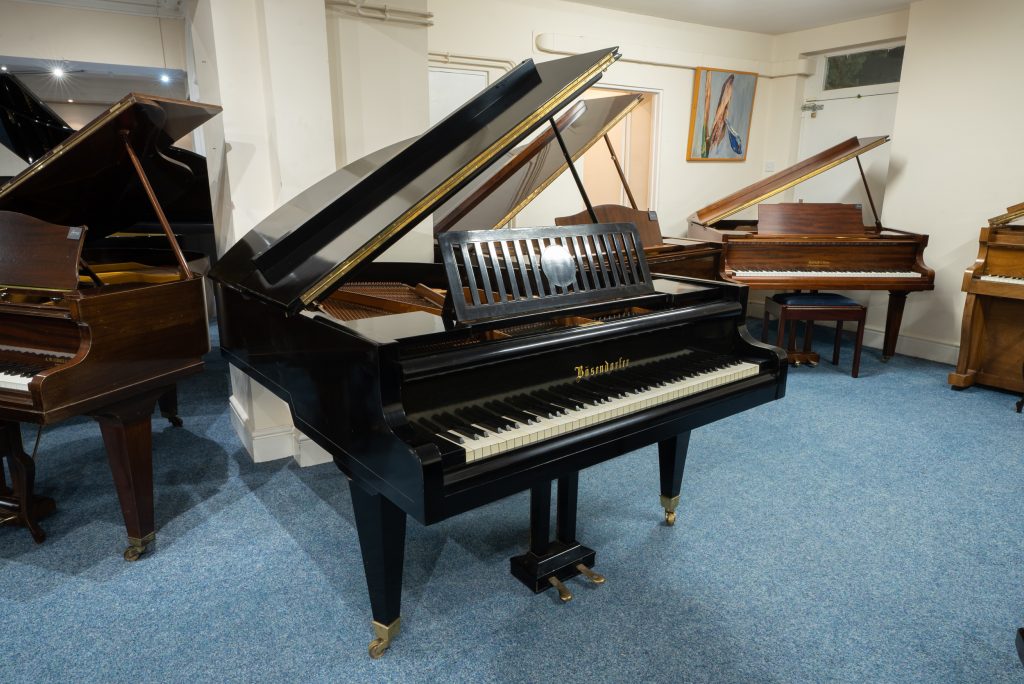 Ignaz is born in 1794 in Vienna as a son of the master carpenter Jakob and his wife Martha Bösendorfer. At the age of 19, he starts his apprenticeship with Joseph Brodmann ( 1763 – 1848 ), one of the most famous piano makers of his time. Young Ignaz seems to be very gifted, and already in 1815, he receives an award by the Viennese Academy of Arts. At the same time in Vienna there are multiple very renowned piano builders like Nanette and Johann Andreas Streicher, Johann Schantz, Anton Walter, Conrad Graf and Michael Schweighofer. Acquiring invaluable knowledge and skill during his apprenticeship Ignaz Bösendorfer takes over the firm from Joseph Brodmann, who retired at the age of 65 in 1828.

It is in the year of 1828 – the year when Franz Schubert is buried next to Beethoven in Vienna – on the 25th of July, when Ignaz Bösendorfer is officially granted the right to become a member of the prestigious Austrian instrument manufactures guild in Vienna. This turns out to be the official founding date of what later will become Austria’s only remaining prime piano manufacturer, spreading colourfully brilliant piano notes worldwide. Ignaz Bösendorfer invests 500 Gulden at the beginning, an investment in prosperity considering the fact that he leaves his son Ludwig a company worth 145.000 Gulden in 1859 when he dies.

1838, Vienna: It is very well known that not every piano can withstand the passionate, virtuoso play of the young composer and artist Franz Liszt. Recommended by his friends he decides to select a Bösendorfer Grand for his concert in Vienna. Due to the superb crafting and high quality delivered by Bösendorfer Liszt does not have to hold back his artistic spirit – to his surprise. The audience is thrilled. Bösendorfer becomes famous over night and following this concert many more shall follow. A close friendship between Liszt and Bösendorfer develops.

Pianos at this time – the period of “Viennese Biedermeier” – are not perceived as an instrument built for stages but as the instrument of entertainment at home. The Imperial government at this time is rather restrictive and social life takes place behind closed doors. Private salons and gatherings, exclusive events, so to say, are held as homage to local artists and composers, and provide high class amusement. The most prominent example of such are probably the Schubertiades – named after Franz Schubert. The piano has a major role for these salons. It is not surprising that you will find up to 387 piano makers in Vienna back then, suppliers of music, joy and entertainment. In the founding year of the company in 1828, Ignaz Bösendorfer handcrafts four pianos and later increases production to a total of 200 instruments by 1835. In 1839, the Emperor of Austria awards Ignaz Bösendorfer the official title of “Imperial and Royal Piano Purveyor to the Court” – the first piano craftsman ever granted this honour. Numerous gold medals and first prizes follow.

Ignaz Bösendorfer – soon becoming close friends with Franz Liszt and Anton Rubinstein – is very active in Germany, UK, Italy, Russia, Brazil and Egypt. The increasing demand for his Bösendorfer Grands leads the artisan to build a new factory. Unfortunately he did not see his project finished. By 1859, Ignaz dies, leaving his manufactory in the skillful hands of his son Ludwig. Ignaz’s death is mourned by all Viennese music lovers.

The perfection of a Bösendorfer exceeds my wildest expectations.
Franz Liszt ( 1811 – 1886 )

Born on April 10th 1835, Ludwig is not only educated by his father but also attends the Imperial Polytechnic Institute in Vienna. His acquired know-how Ludwig later on puts to good use. In 1860, he invents a new action, and in 1862 he receives the first foreign award in London for his “Patent Grand”. In 1867, he participates at the World Exhibition in Paris. The success of his pianos, also due to their breath-taking design, is that remarkable that Austrian Empress Elisabeth, “Sissi”, orders a Bösendorfer Grand as her personal gift for Empress Eugenie of France. This instrument is designed by Theophil Hansen, a famous architect in Vienna, who built the Musikverein and the Austrian Parliament. The Paris Exhibition increases Bösendorfer’s fame all over the world, and the export destinations include places like Singapore, Rio, Stockholm and Tokyo.

In 1870, Bösendorfer buys the building at Graf-Starhemberggasse 14 in the Fourth District of Vienna. The office and the showrooms move into the city centre of Vienna, the Palais Liechtenstein in the Herrengasse 6. Ludwig is not only an artisan of the Art of the Piano but also a patron of music and arts. On November 19th, 1872, Hans von Bülow, son-in-law of Liszt, inaugurates the Bösendorfer Hall at Palais Liechtenstein, after Ludwig recognised the remarkable acoustic sound qualities of the former riding stable. During the next 40 years joyful and artistically remarkable piano and chamber music concerts and recitals are held there. Initially organised by Ludwig, around 4.000 concerts take place in the Bösendorfer Hall counting artists such as: Wilhelm Backhaus, Ferruccio Busoni, Eugen d’Albert premiering in Vienna 1886, Wilhelm Kienzl, Fritz Kreisler, Theodor Leschetizky, Franz Liszt, Gustav Mahler, Sophie Menter, Ignaz Paderewski (frequently seen on stage of the Bösendorfer Hall), Max Reger, Anton Rubinstein, Pablo Sarasate, Emil von Sauer, Artur Schnabel, Richard Strauss, Ernst von Dohnanyi and Hugo Wolf. The Bösendorfer Hall turns out to be a catalyser and focal point of music and art. Bösendorfer not only supports these concerts by delivering pianos but actively fosters developments in music and art.

In 1833, production increases to 288 pianos per annum and Bösendorfer Grands attract attention not only of the nobility, emperors and the European elite (Empress Elisabeth, Pauline Metternich, Archduchesses Stephanie and Valerie, Katharina Schratt, Archduke Eugen, the Russian Tsar Nikolaus II and the Japanese Tenno) but artists as well. Johannes Brahms always asks for Bösendorfer pianos during his summer performances, Johann Strauss buys a Bösendorfer Grand for his apartment in Vienna in Praterstraße and Gustav Mahler is supported by Bösendorfer during his student years in Vienna.

Always curious about implementing the best possible technical advances of his time, Ludwig elaborates with his technical director Franz Berger on the Viennese action and patents various inventions. Around 1900 the Italian composer Ferruccio Busoni is transcribing the famous organ works of J.S. Bach and requests a particular instrument to be built. Ludwig accepting the challenge designs and crafts the first Bösendorfer Concert Grand 290, which later shall become known as the Imperial. The tonal range of 8 full octaves allow for the additional needed bass and a particularly orchestral sound experience. By innovating and steadily developing Ludwig Bösendorfer succeeds in capturing the association of creative engineering and quality to his brand name, his family name – a brand that is set to become the synonym for perfection in detail.

Although married twice, Bösendorfer does not have children and so he decides to sell the factory in 1909 to his friend Carl Hutterstrasser. Carl was a banker not a piano maker but a person who knew all about Ludwig’s drive to maintain the high quality of the pianos. On May 9, 1919, Ludwig plays his last chord. Besides his final wish of being laid to rest in a simple fashion, he dedicates most of his remaining private wealth to the Society of the Viennese Friends of Music. His grave is marked by his name and dates only, modest, as he was. Later, Ludwig shall receive an honorary grave monument from the City of Vienna.

During the era of Carl Hutterstrasser, political unrest unfolds in Europe. Nevertheless, work at the Bösendorfer piano factory continues. In 1927, Bösendorfer wins the “Grand Prix” in Geneva where the company exhibits a Bösendorfer Concert Grand as well as a Grand Upright. In 1931, the sons of Carl Hutterstrasser, Wolfgang and Alexander, become business partners of their father. Contrary to their father, both sons are artisans in the Art of the Piano, very well educated at their father’s manufactory Bösendorfer and abroad. Both of them are very well connected to Viennese cultural institutions, artists and events, as was Ludwig Bösendorfer. Following the economic crisis, Bösendorfer’s business affairs decline down to 52 instruments a year in 1933. In 1936, celebrating yet another success and winning the competition of the British Broadcasting Corporation (BBC), production recovers a bit to a level of 144 instruments.

At the age of 80, Carl Hutterstrasser dies in 1942 leaving both of his sons in charge. During the Second World War, the company’s timber yard is hit by air strikes and is heavily damaged. When allied forces occupy Vienna, soldiers use pianos displayed in the Bösendorfer showroom at the Musikverein for firewood. In 1953, Bösendorfer is celebrating its 125th anniversary. On this occasion the world renowned pianist Wilhelm Backhaus receives the Bösendorfer Ring, honouring his dedication and contribution to the piano world.

After the war production slowly recovers hitting the mark of 100 per annum by 1966 again. It is the beginning of prosperous times in post-war Europe. The Sound of Vienna is being heard again throughout the world, Bösendorfer pianos shipped to all continents. Alexander and Wolfgang Hutterstrasser, facing the same situation as Ludwig back then, are unable to find a successor within their family. Eventually, they sell Bösendorfer to the U.S. Corporation Kimball International based in Jasper, Indiana on the 1st of July, 1966.

In 1978, Bösendorfer celebrates its 150th anniversary with a gala concert by the Vienna Philharmonic Orchestra conducted by Horst Stein in the Golden Hall of the Musikverein. On this occasion, Paul Badura-Skoda is awarded the Bösendorfer Ring and the young German pianist Gerhard Oppitz, who had won the Rubinstein Competition the previous year and the Tel Aviv Competition the same year, is premiering in Vienna.  The Viennese pianists Jörg Demus, Alexander Jenner and Walter Klien play concerts at the Brahms Hall on this very occasion of the anniversary.

The American owner preserves the tradition of promoting young aspiring artists. The Bösendorfer scholarship is offered annually, as well as the support of the International Beethoven Competition with the donating of a Bösendorfer Grand Piano 200 for the 1st prize. Also, the Bösendorfer Competition for students of the Vienna Music University mdw has now been supported for more than 100 years. Facing  increasing demand, Bösendorfer is moved from Graf Starhemberg Gasse to Wiener Neustadt, a small city close to Vienna, in 1973. The same year, Concert Grand opus 30.000 is leaving the manufactory, selected by the Federal Chancellor Dr. Bruno Kreisky and shipped to Japan.

In November 1986, Bösendorfer presents the first Player Grand – a self playing Imperial 290 – at the Salzburg Festival. Revolutionary depth and accuracy of recording result in unheard authentic reproduction of any tune. The first digital masterpiece back then.

Following yet another turn in business operations, Kimball sells Bösendorfer to the Austrian BAWAG-PSK Group in 2001. The acquisition by the bank brings Bösendorfer back to Austrian ownership but only for a rather short period of time.

In 2008, the Japanese enterprise Yamaha acquires Bösendorfer. Conscious and cautious about the precious heritage Bösendorfer is carrying, the Austrian manufactory remains fully independent and continues to be operated as a separate Austrian company. Successfully restructured and fortunate to further develop distribution with a partner who is experienced and sophisticated within the music industry Bösendorfer gains new strength. Bösendorfer works closely together with Yamaha when it comes down to selling and distributing instruments, however, all Bösendorfer Grands are manufactured in Wiener Neustadt, exclusively. Bösendorfer focuses on the premium manufacturing of close to 300 instruments per year, which are handcrafted close to Vienna, from where it all started.

Bosendorfer Pianos For Sale and Sold at The Piano Gallery 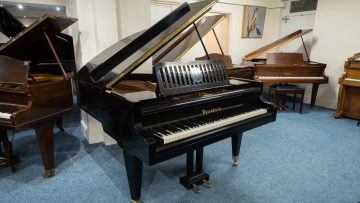 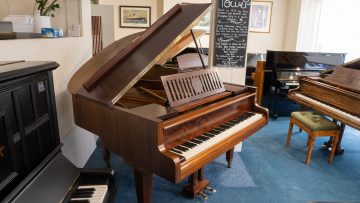 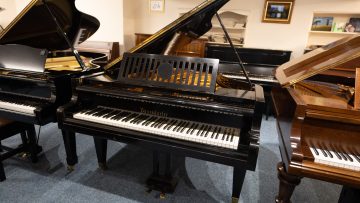 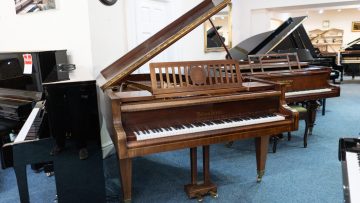 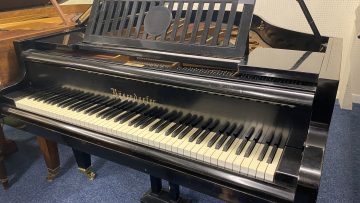 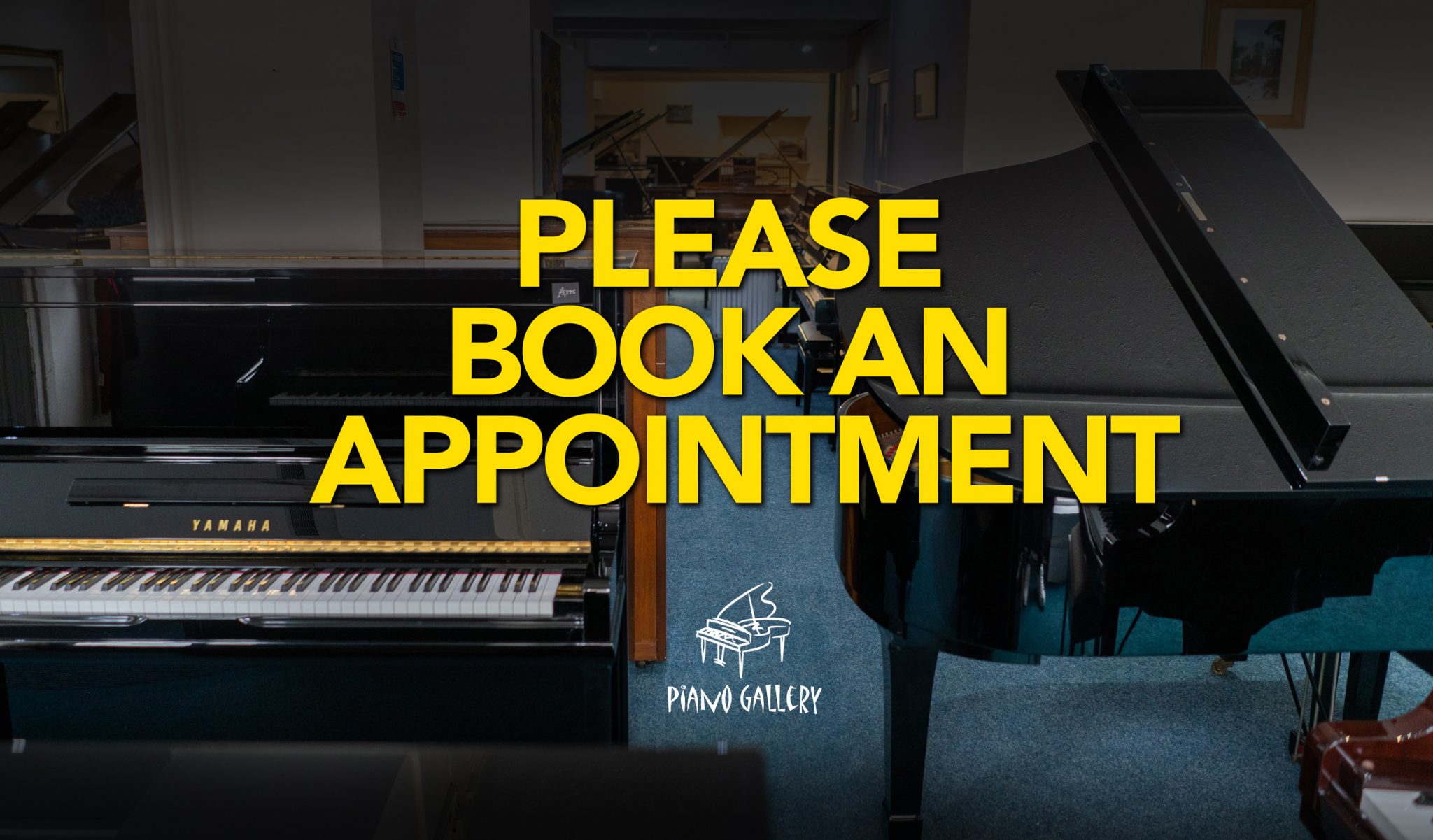